Those of you who follow me on social media know, that I very rarely venture outside of studio walls. Unless it’s for an absolutely grand reason. Last year I dusted off the outdoor gear for one such reason: I was given the opportunity to photograph the hidden gem of Derbyshire’s countryside: Carnfield Hall.

Situated 1½ miles from junction 28 of the M1, on the boarder of Nottinghamshire, this 15th century hall,  cocooned in its ancient deer park and surrounding woods, grants visitors tranquility we all crave, in the madness of today’s world. Life at Carnfield can only be described as the idyllic childhood we read about in books, filled with nature walks, free play and animals, seamlessly accompanying us everywhere we go.
For close to ten years now, the current owners, Graham and Heidi, together with their sons, call this place their home. 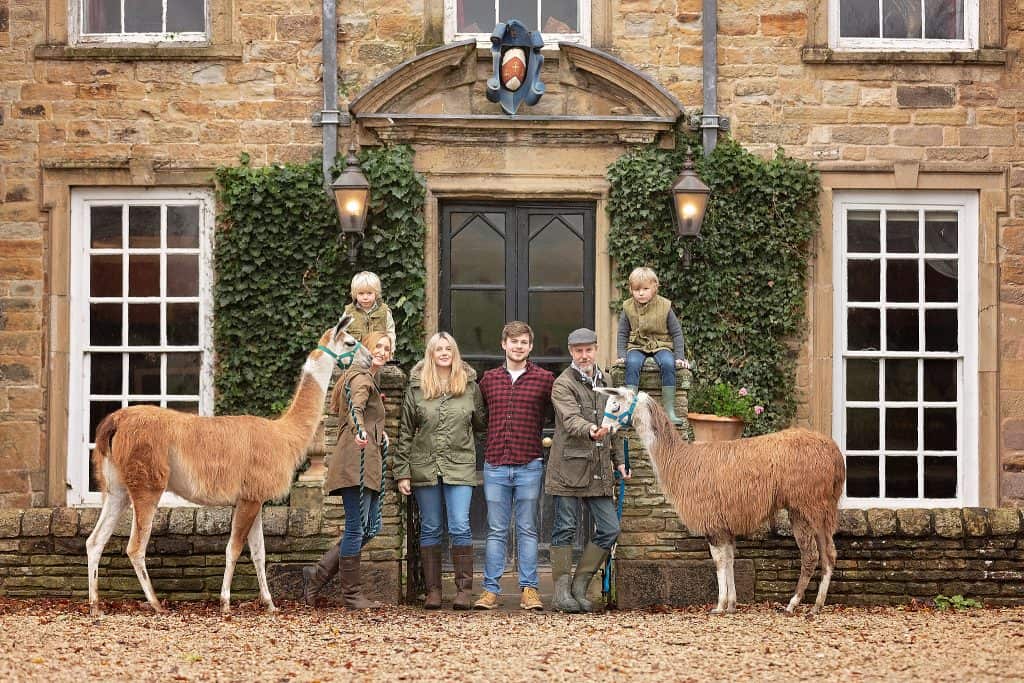 Upon arrival at the gate on a very misty, Saturday afternoon, I called Heidi asking for directions to our meeting point. Having caught the family on their way out for an evening walk, I was promptly directed to “drive past the house, past the hangar and park near the llamas”. I giggled to myself. 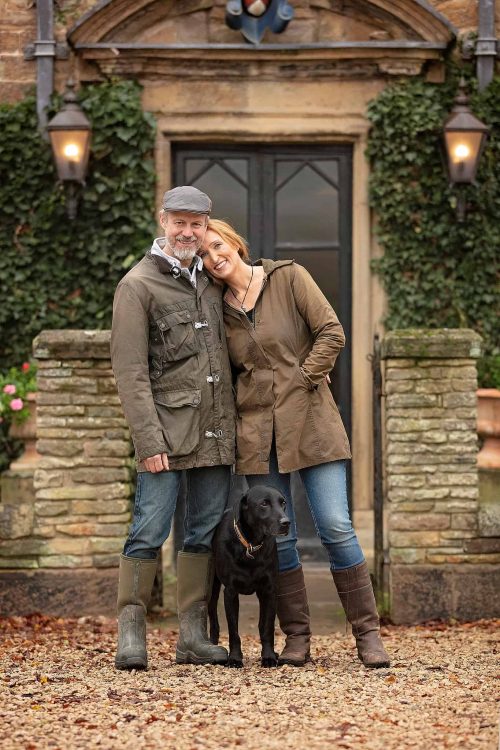 They are one of those couples you cannot help but love. Graham is passionate about his planes and lovingly restored a couple. Heidi, nurse by profession, llama trainer by heart, is the perfect lady of the manor, extremely level headed and down to earth. There is not an inch of pretentiousness about them, and you are treated like a family from the moment you arrive.

They both welcome me, wearing wellies and ankle deep in mud: “You don’t look ready for Carnfield!”

With one look at my not-so-farm-friendly footwear, I knew I should have come better prepared, but not wanting to sound like a drama queen, I convinced them I am totally fine climbing up the muddy hills and jumping through puddles, whilst wandering around the acres of their Alfreton estate.
The next hour or so has gone by so fast. It could have been an hour, it could have been three. You don’t feel like looking at the clock and strangely lose all interest in checking your phone and keeping up with any social media events, such is the charm of Carnfield, it provides you with all the focus, happiness and fulfilment one needs at any given time. The place has got its own pace, yet you adjust to it extremely fast and no longer crave the world you left on the other side of the gate.
With the vast amount of land surrounding the house, Heidi and Graham filled it with animals. You will find cows and some really friendly sheep, strolling around looking down at the human peasants they have to share their home with, but the most fascinating animals I had the pleasure of meeting there were their herd of llamas. 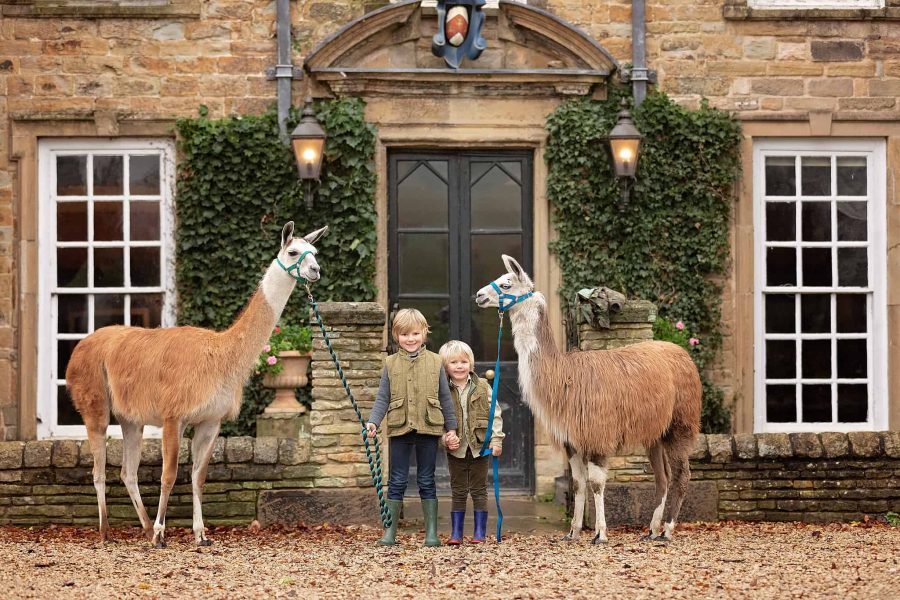 Contrary to popular belief, llamas don’t bite. They spit when agitated, but mostly at each other. They are really sociable and extremely smart animals, known for their yarn, but less for their guarding abilities. They have been used to protect live stock in North America since the 80s. They can live up to 30 years and their pregnancy last almost the entire year! 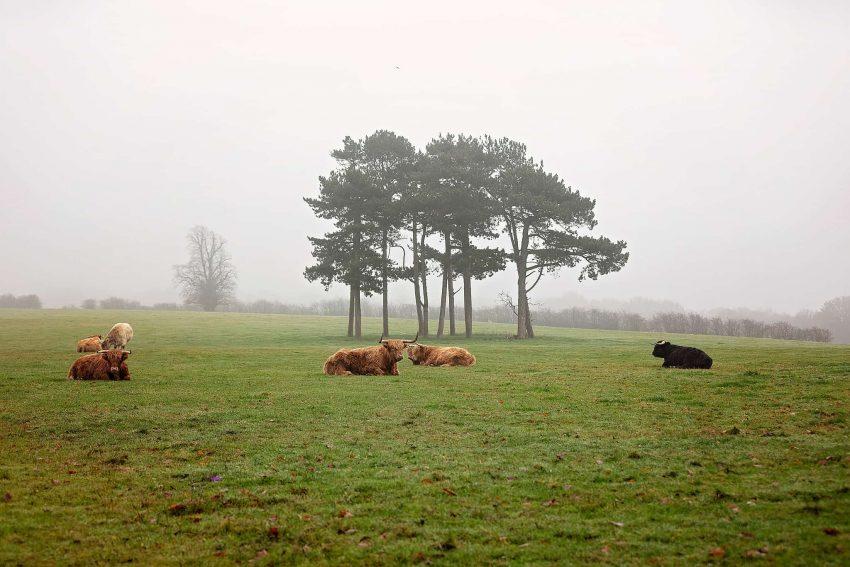 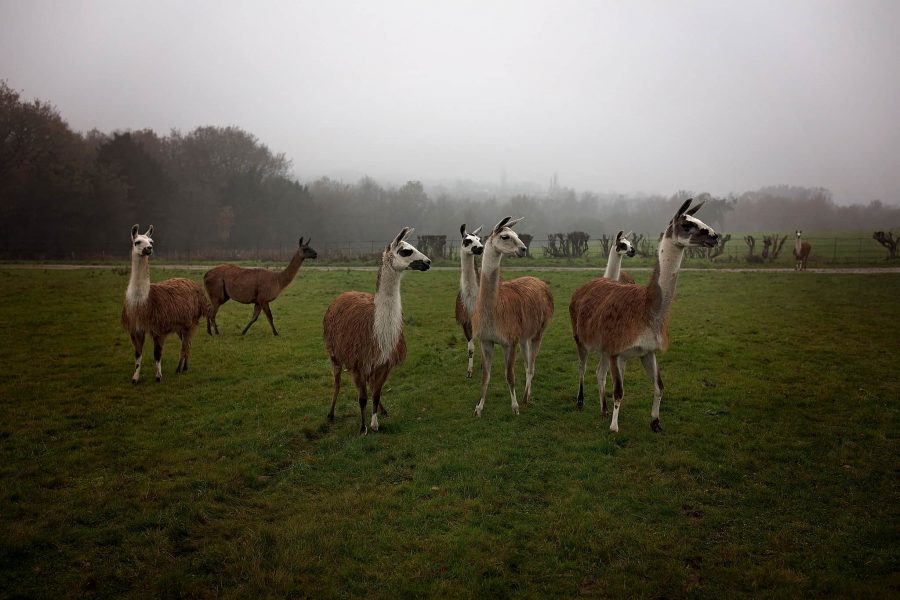 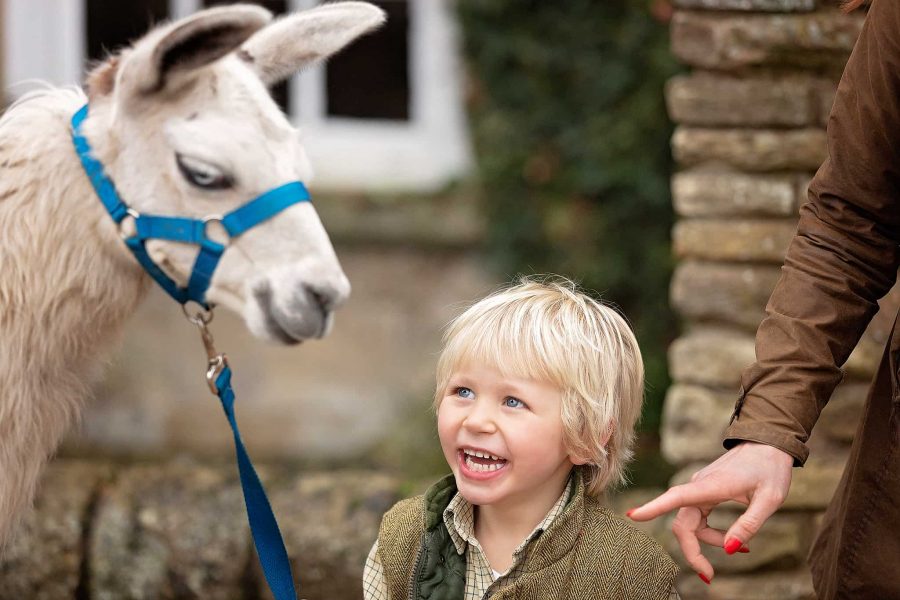 The most fascinating thing I have learned however, was the fact that the blue eyed llamas are born deaf. Most llama breeders shoot them as they are no good for training or breeding if they are deaf. If they have one blue eye, they are likely to either be deaf or carry the gene. Heidi took it upon herself to raise the blue eyed Beau, who is completely deaf, and together with a team of volunteers, they gave him a great life at the farm, whilst training him by tapping different parts of his body. They tap his knee to get him to show his foot, upper shoulder area to get him to sit, his neck to tell him it’s ok to munch leaves when they stop on a trek. She uses hand signals to tell him to stop and stay. He is doing remarkable well, being just a llama “teen” at almost 3 years old. 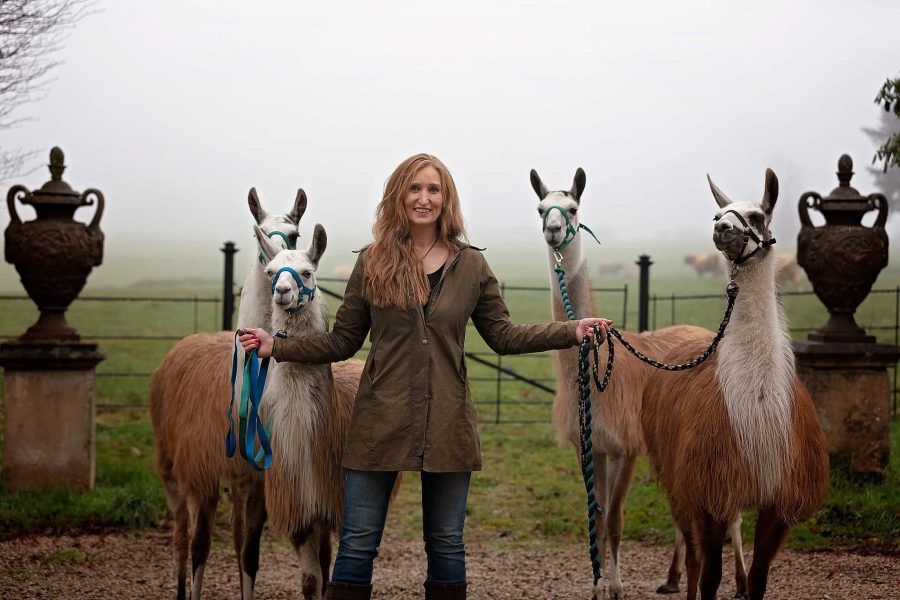 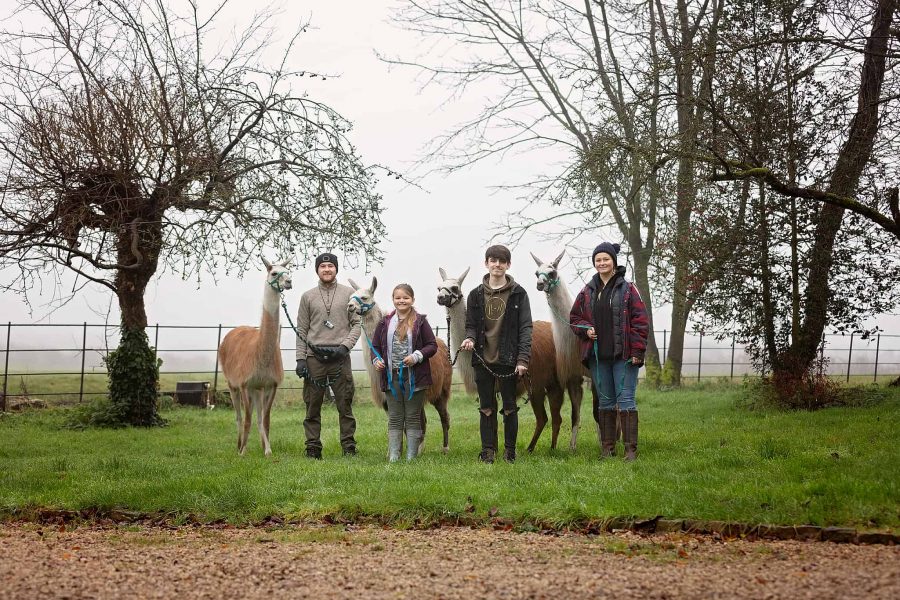 We ventured through the woods, and the fields, kids played as they kept up the pace like pros. After the sun has gone down, we decided to head home for supper. The whole house has a strong Tudor vibe and it makes you feel as though you’ve gone back in time. Due to it being a Grade II listed building, there is no option to instal any mod cons, but those would be completely out of place here anyway. Massive, traditional fire places keep the house warm in winter, and thick, stone walls keep it cool in the summer. Four poster beds and beautiful, old staircase dating from 1628 add to the charm of it all. I felt privileged to be surrounded by so much history.
When asked about their plans for the house, Heidi and Graham smile. There are no plans, they are living it. There is no “one day we will do this” scenario, written in the sand. They are living for now, whilst being completely present. Self proclaimed “keepers” of the house, they believe their job is to preserve it for future generations, for them to experience a bit of this history first hand. When everything around gets painted over and forgotten, they are respectful of the past. 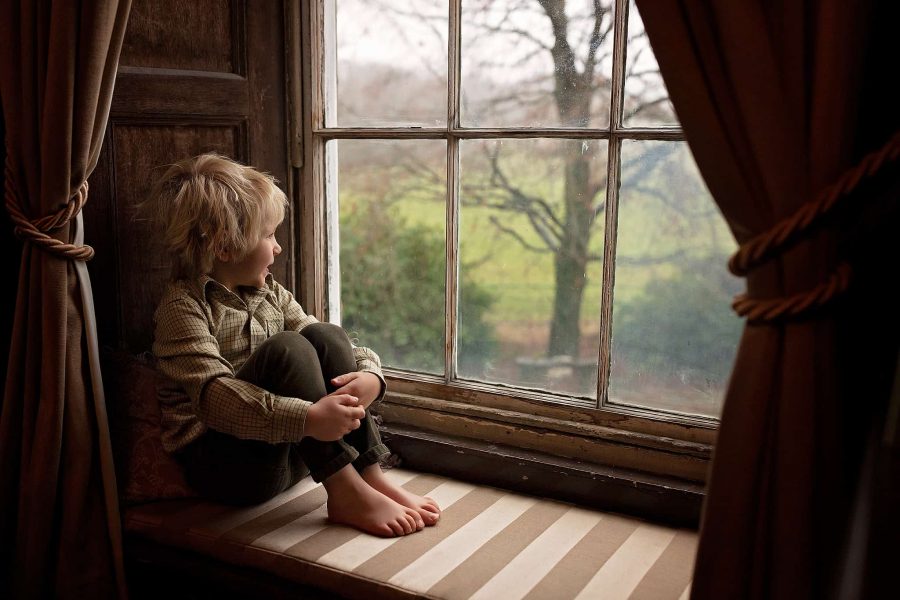 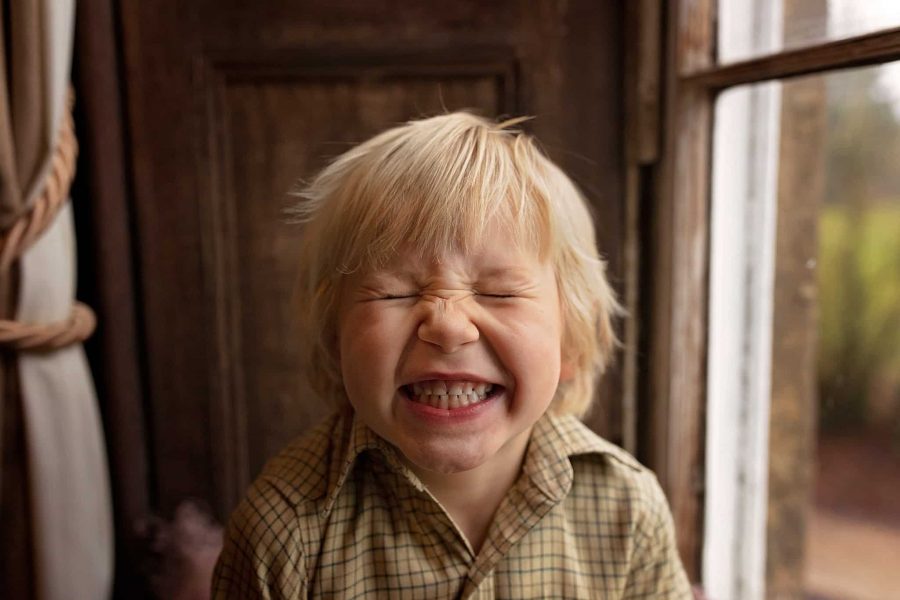 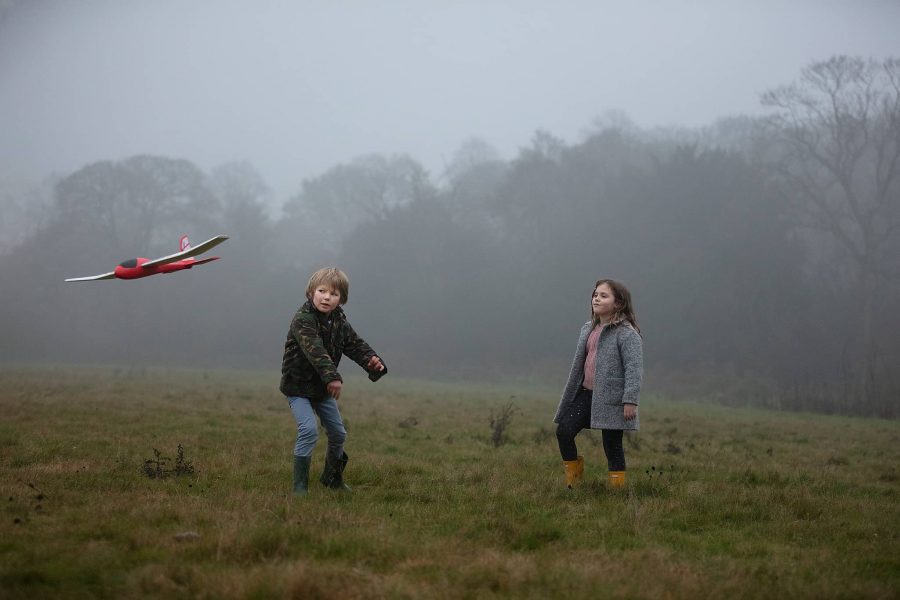 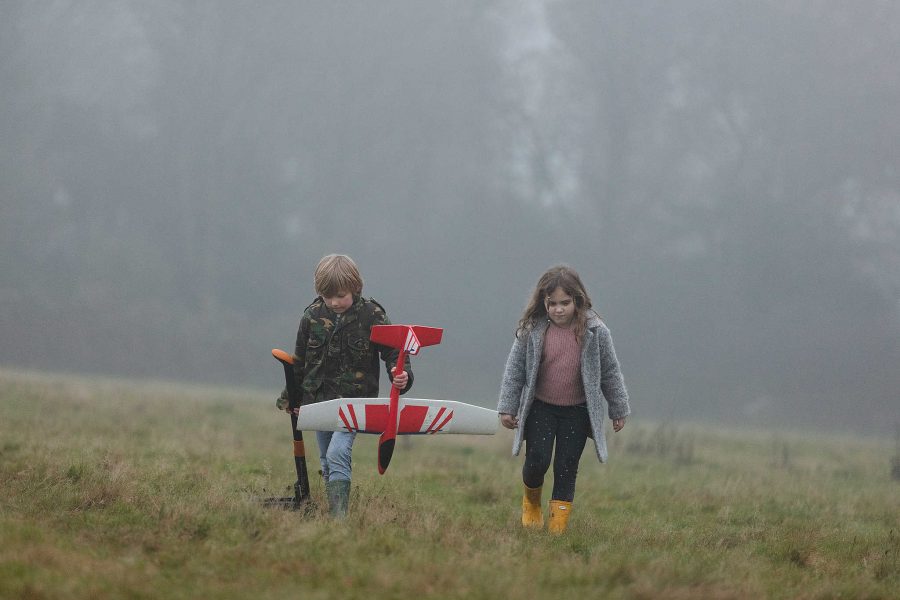 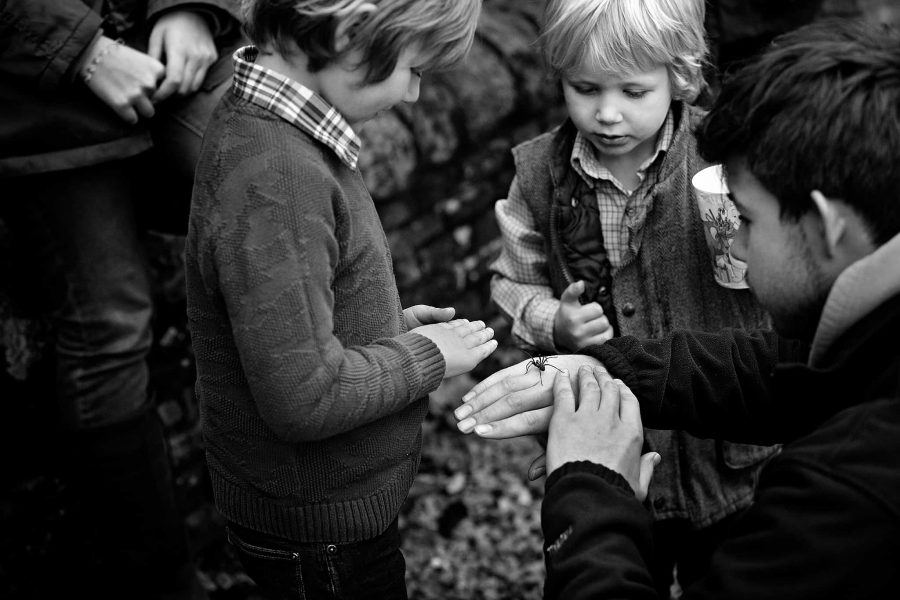 Carnfield Hall was featured on Channel 4 “Country House Rescue” for their magnificent facade, but the place is equally well known for their ghosts (one of the previous owners was murdered in his bed, and the room feels unquestionably eery). I braved the stay, taking the owners up on their generous offer of a night in one of the fabulous beds, that undoubtedly could have told some hair raising tales. Following an evening of mulled wine and history, I was now convinced someone is going to sit at the bottom of the said bed and start whispering to me in a deep, gravely voice. I wondered if anyone would hear me scream? The chances were slim as the owner’s bedroom seemed to be far enough in the house to be in a completely different postcode. I am a great believer in trying new things and experiences and sleeping in a haunted house was most certainly high up on that list.
I did feel rather happy in the morning, waking up to realise I am still alive. My legs dropped on the floor slowly (there could still be someone under the bed, I have seen plenty of movies that make this imaginary situation very real in my head). Following the corridor, I found myself in the bathroom, kept in line with the traditional look of the home. Upon the exit I realised I may have locked myself inside. Laughing at the situation I was in, I tried shouting to get someone’s attention. The walls were most definitely made for a zombie apocalypse as my scream did go unnoticed. In a brief spark of genius, I decided to use my toothbrush in a very MacGyver way, and freed myself eventually.
“Did you lock yourself in the bathroom? The last person who locked themselves in there was Paul Smith, you know, the designer.” I suddenly felt less stupid. It happens to Paul Smith, it can happen to anyone.
After breakfast, we all gathered outside to capture some family portraits. The light was perfect, the weather couldn’t have been better. Llamas joined us in photos, boys found a friendly spider and watched it curiously, monitoring its every move. Graham took pity on me and lent me a pair of proper “Carnfield boots”. We went out on a walk, relaxed. Kids enjoyed being kids, with no iPad in sight. It’s enviable childhood, they may one day appreciate in full, having their own children.
Heidi and Graham work extremely hard to make it all look so idyllic. You will never get a feeling of stress from them though. They always have time to stop and listen with intent to understand, not talk. 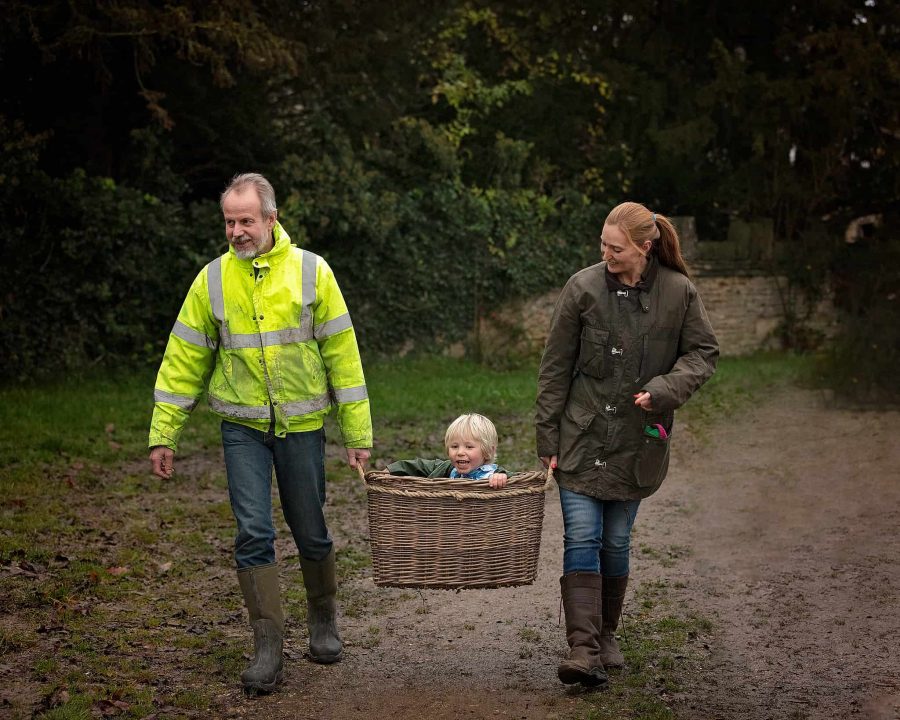 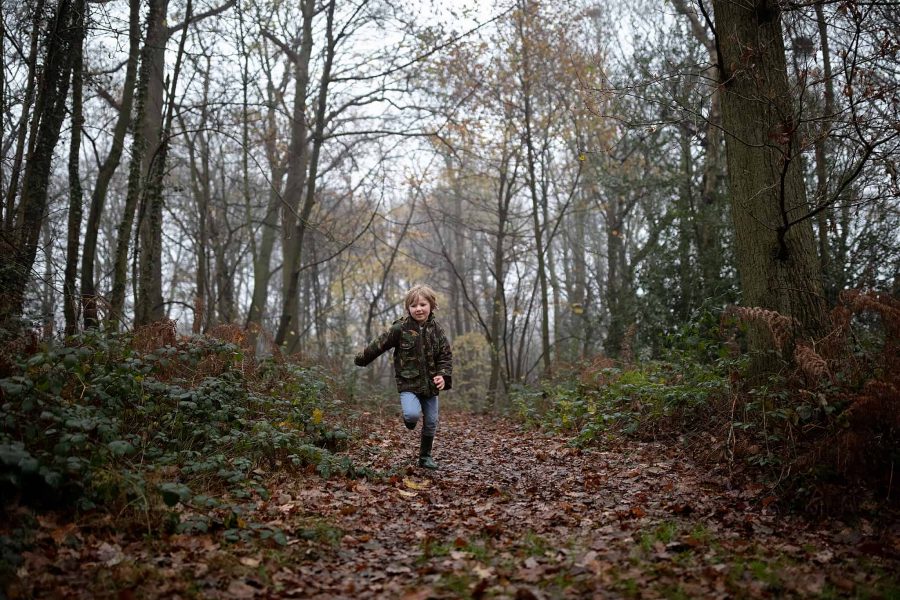 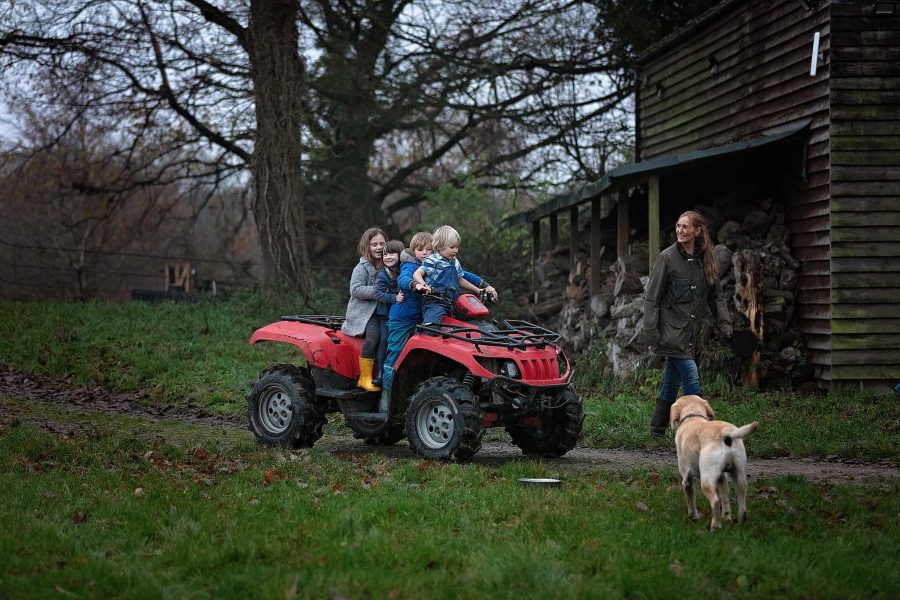 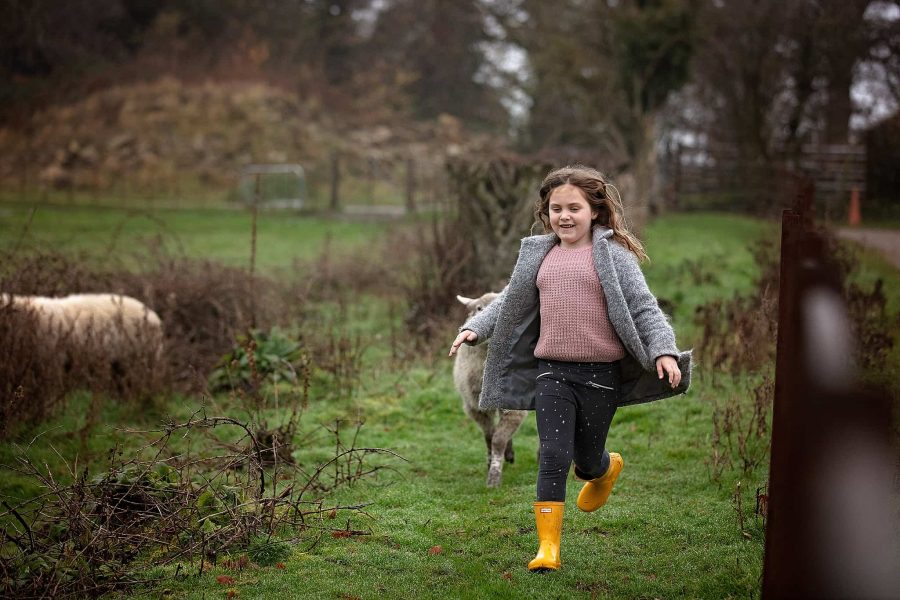 I felt some deep, underlying sadness leaving their “island of calm”, as it truly feels like one. I did however feel happiness as well. I had the privilege to share a couple of days with them, photographing their life and capturing it for posterity, preserving moments, just like they preserve that bit of history for their children, who may sit near that big fireplace one day, thinking about all those who sat there before them. 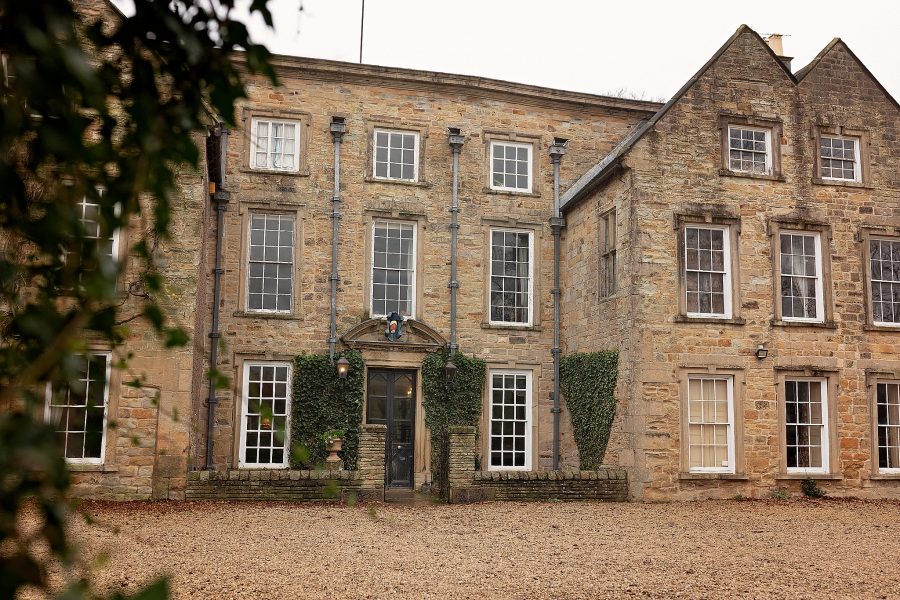 *If you would like to experience a bit of calm and serenity in this unpredictable world, Carnfield Hall llama treks are available throughout the year. Their new website ( carnfieldhallllamas.co.uk ) is in progress, but you can get in touch with the guys by emailing them at heidi@carnfieldhall.co.uk